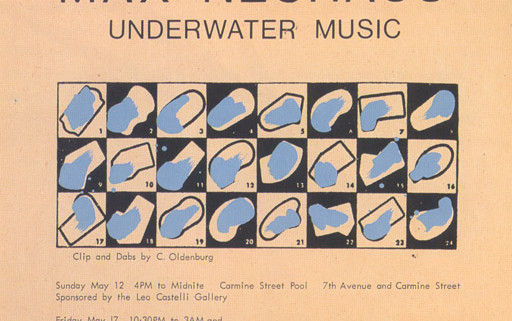 In the early seventies Neuhaus realized a series of now famous sound works in water. Each of these drawings represents one of these works. They show the configurations of the sound sources in the three-dimensional space of each body of water. As the series has a constant scale throughout, the relative size of the image on the paper from drawing to drawing reflects the relationships between sizes and shapes of the bodies of water from work to work. An example of these drawings, all of which are composed in the same form, is shown in « Max Neuhaus: Sound Works, vol. II » (Ostfildern: Cantz, 1994), page 21.

These event/installations were done in water and mark the beginning of my transition from working in concert halls to making site-specific sound works. The basis for the series was the exploration of the new sound world offered by our different sense of hearing in water. The first was realized in 1971 after I’d been living on the water for a year. I had not yet established the idea that a sound work could be done in the form of an installation. I was commissioned by New York University to make an event. I thought if I insisted that it last all night it would be clear that it was not a performance but something where people could come and go. Most stayed from the beginning to the end, though; the traditions of contemporary music die hard. Quite a wonderful thing happened accidentally during the work. The overflow drains for the pool had somehow been shut off. The sound being produced by the running water through the whistles added enough water after the first six hours to escape from the pool and start to invade the basement. What was dry land became submerged with ‘sound’. These works were realized in public and university swimming pools in the United States and Canada from 1971 through 1974. I built each aural topography on site using the acoustic formed by each pool’s different underwater shape as the work’s foundation. The sound sources were hydraulic: a network of hoses fed water through a configuration of whistle-like devices, each enclosed in a reflector. The water pressure in the hoses caused them to flex constantly, reorienting each sound source independently. This formed a shifting sound texture which varied according to the listener’s position in the pool.